As a means to highlight compelling stories coming out of the world-renowned coastal town, Cece founded 90265 Magazine in and the activism-based news platform The Local Malibu.

In 2020, Cece founded The Current Report, a regional news and politics platform and began exposing the corruption at LA Metro which has lead to national news coverage and has expanded into co-hosting and producing on TNT Radio a global, 24/7 news talk station.

Having spent most her childhood on sands of Zuma Beach, Cece left Southern California in her early 20’s, but it was only a matter of time before she returned to the idyllic place that held so many wonderful memories from her youth.

In 2006, she made the journey back to Malibu permanently and the passion to preserve it was ignited.

After decades in the fashion industry, Cece naturally transitioned into  Public Relations using her design background to assist clients with their overall branding and visual needs.

In 2012, Cece used her P.R. and messaging skills in her first high-profile environmental battle,the Malibu Lagoon Restoration Project and from there became instrumental in Malibu Politics with her involvement in  the success of Measure R, Measure W and backing the winning candidates in the 2016 and 2020 City Council races.

The first increase in the Malibu City contract with the Los Angeles Sheriff’s Department in fifteen years was executed on June 29th, 2021 as a result of almost three years of Cece’s reporting and educating the Malibu community regarding the lack of adequate patrol coverage in the area.

On December 9th, 2019, Malibu City Council passed an amendment to the Local Coastal Plan 5-0, banning the use of rodenticides in Malibu. Cece was active with local environmentalists by participating in protests and putting added pressure on local government officials to pass the ban.

After the city’s failure to provide leadership and disaster assistance during the Woolsey Fire  in November 2018, and their failure to follow through on campaign promises, Cece spearheaded the recall campaign of two City Council members she helped get elected.

For the 2016 City Council election, Cece created a comprehensive local media campaign strategy for the Team Malibu slate using all platforms available, print, social media, and website, which proved to be an integral part in seating three council members in the November election.

Measure W was the second ballot measure Cece was involved in, and the first media campaign spearheaded by her publication The Local Malibu, which included a special edition print publication, and proved to be part of a successful strategy winning the No on W ballot initiative in 2015 with 60% of the vote.

The Local Malibu was behind the fight to save a 1oo+ year old Sycamore tree in front of the Malibu Lagoon from being torn down for a development project. It was a hard-fought battle won by activists and community members in 2015.

In 2014, as a community activist, Cece worked with Measure R campaign organizers to promote a ballot measure that would limit retail chains from destroying Malibu’s rural coastal charm. Measure R passed with 60% of the vote.

The Malibu Lagoon Restoration Project was the first high profile environmental battle Cece was involved in. The project was highly charged, dividing the community, and made global headlines.

In 2018, Cece broke multiple global stories including the law enforcement cover-up in the Malibu Creek State Park Shootings case, the disappearance of Matthew Weaver Jr., and provided the most comprehensive coverage during the Woolsey Fire with over a million hits across social media platforms during the most devastating wildfire in Malibu’s history.

Most recently, Cece exposed the Lost Hills Station failure to issue a Public Safety notice after a sexual predator gained access to a condominium complex and sexually assaulted a Pepperdine student which led to disciplinary against the deputies and a change in command staff at the station.

The pandemic allowed Cece to expand her news coverage leading to the exposure of L.A. Metro Counterfeit Mask scandal which opened two federal investigations within 24 hours of the story’s release and once the Biden Administration was made aware of the investigations the head of their transition team for public transportation was the subject of, a different candidate was chosen as Secretary of Transportation under the new administration.

Cece is currently investigating the 10 year-old Mitrice Richardson case which the Los Angeles Sheriff’s Department is investigating as a “clue-driven” case under the direction Sheriff Alex Villanueva and recently completed the first installment of the investigation into Chester Bennington’s death: Missing Links: The Unanswered Questions in the Death of  Linkin Park Frontman Chester Bennington.

In 2020, Cece began exposing the corruption at LA Metro which has lead to national news coverage including working with officials and watchdog organizations in DC.

90265 Magazine – Established as a passion project to get back to our roots, 90265 Magazine is known for its intimate look at the authentic Malibu lifestyle, featuring local activists, creatives, influencers and tastemakers who live in Malibu.

The 90265 Magazine brand has evolved and expanded, providing a platform that offers a behind-the-scenes look at all things fashion, beauty, health and wellness, travel and lifestyle, with an emphasis on sustainability and eco-friendly principals. 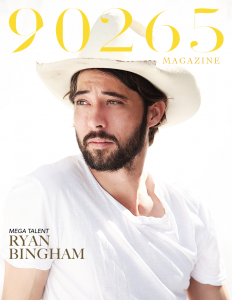 The Local Malibu is an activist/truth seeking platform reporting on major news stories important to the Malibu Community and surrounding areas. Our mission is to inform, educate, and inspire those who are passionately curious, motivated to make an impact in society. 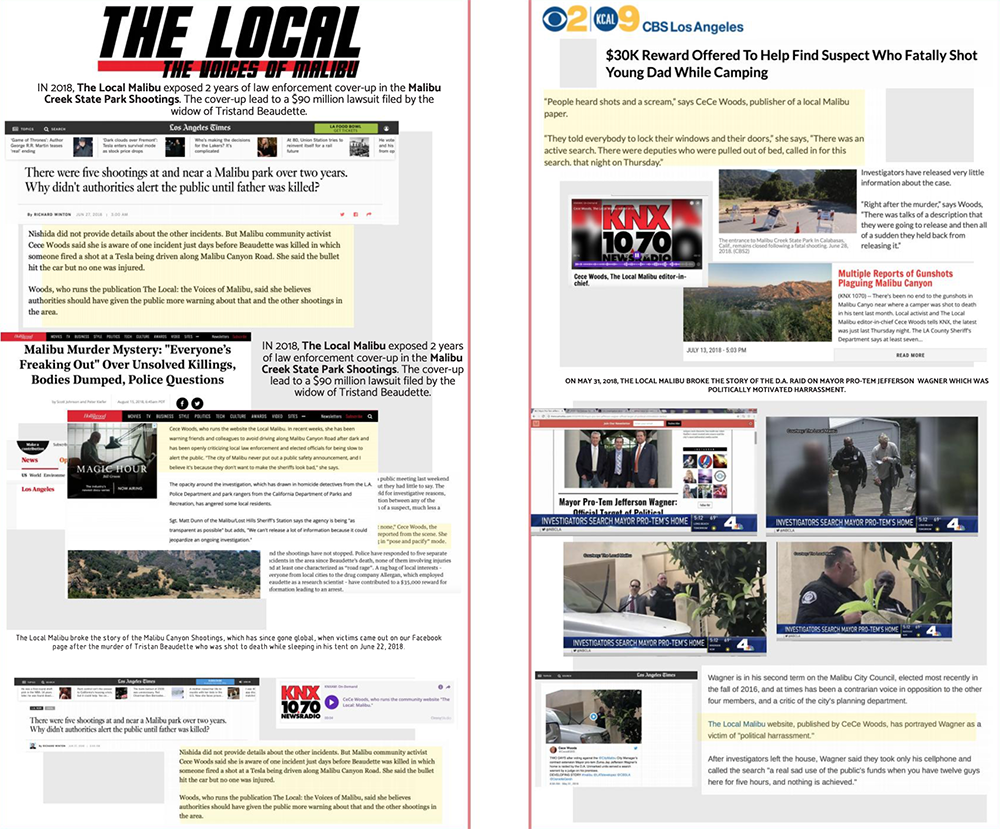 Whether the goal is holding government officials accountable or seeking reform in the justice system, exposing all the facts that are reported in a story is the focus on The Current platform Cece created in 2020. Her thorough and meticulous reporting strategy has resulted in criminal investigations at the local and federal level and continues to develop a solid network of sources, many of whom are stepping forward to fight public corruption and the injustices perpetrated by elected officials whose decision making during  these unprecedented times has resulted in economic collapse. Cece’s track record and commitment to truth in journalism has inspired other media outlets to share her stories to reach an exponentially larger audience increasing our power to affect change.

With expansion into regional news with The Current Report platform, Cece grew the 90265 Magazine brand to include Cali Mag, offering a behind-the-scenes, authentic look at the iconic California lifestyle.

Cece’s activism and investigative reporting have led to being quoted regularly in the media, and featured many articles related to Malibu and LA politics.

The exposure of the cover-up in the Malibu Creek State Parks Shootings in 2018, and Cece’s investigative reporting, was featured in GQ Magazine’s June, 2019 story “The Unsolved Mystery of the Malibu Creek Murder”.

The Hollywood Reporter, has featured Cece numerous times in the last year. Most recently, in the article “A Chance to Star Over: How Malibu Embraced Optimism After the Fire”.

During the Woolsey Fire, Cece was boots on the ground reporting receiving over a million hits across her social media platforms. As the only local news sources reporting from the front lines, New Yorker Magazine featured her in the article “The Woolsey Fire Engulfs Southern California”, as well as the L.A. Times coverage “South Bay Surfers Deliver Supplies to Malibu Residents Affected By the Woolsey Fire.”

The Guardian UK article “Malibu Residents Fear Serial Attacker in Their Scenic Enclave”quoted Cece as the editor of an “online newsletter” linking back to her reporting on the Malibu Creek State Park Shootings.

In Richard Winton’s article “There Were Five Shootings At and Near a Malibu Park Over Two Years. Why Didn’t Authorities Alert the Public Until Father Was Killed?” Cece was mentioned as a Malibu activist revealing information on shootings not disclosed to the public.

Cece was the only media present on September 14th, 2022 at LA Metro Headquarters when the Los Angeles County Sheriff’s Department served warrants in a criminal case involving former CEO Phillip Washington who the Biden administration nominated in July to be head of the FAA. 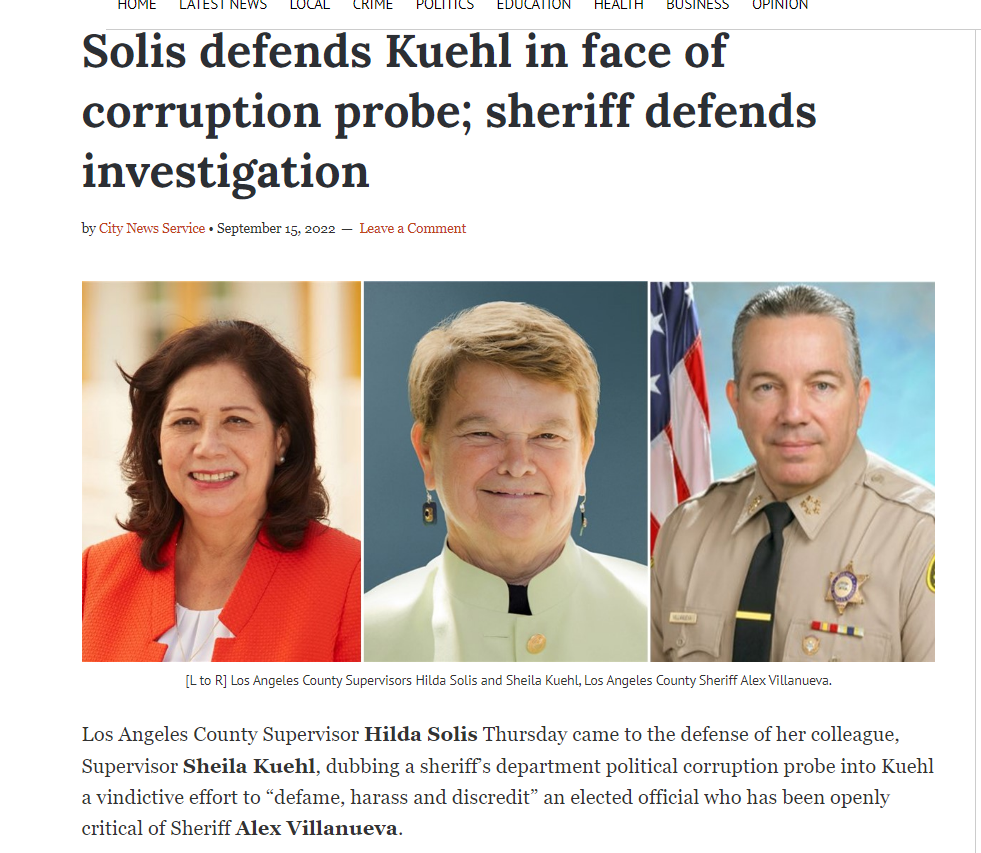 The Fall-Out from LASD Raids on Metro, Kuehl, Giggins Raids Continues – is Supervisor Solis Next?

The fall-out from the criminal warrants served at LA Metro Headquarters and the homes of Supervisor Sheila Kuehl and her friend and colleague Patti Giggans, CEO of Peace Over Violence, continues to unfold and it looks like it could potentially include another member of the Board of Supervisors. Hilda Solis, a staunch critic of Sheriff […] 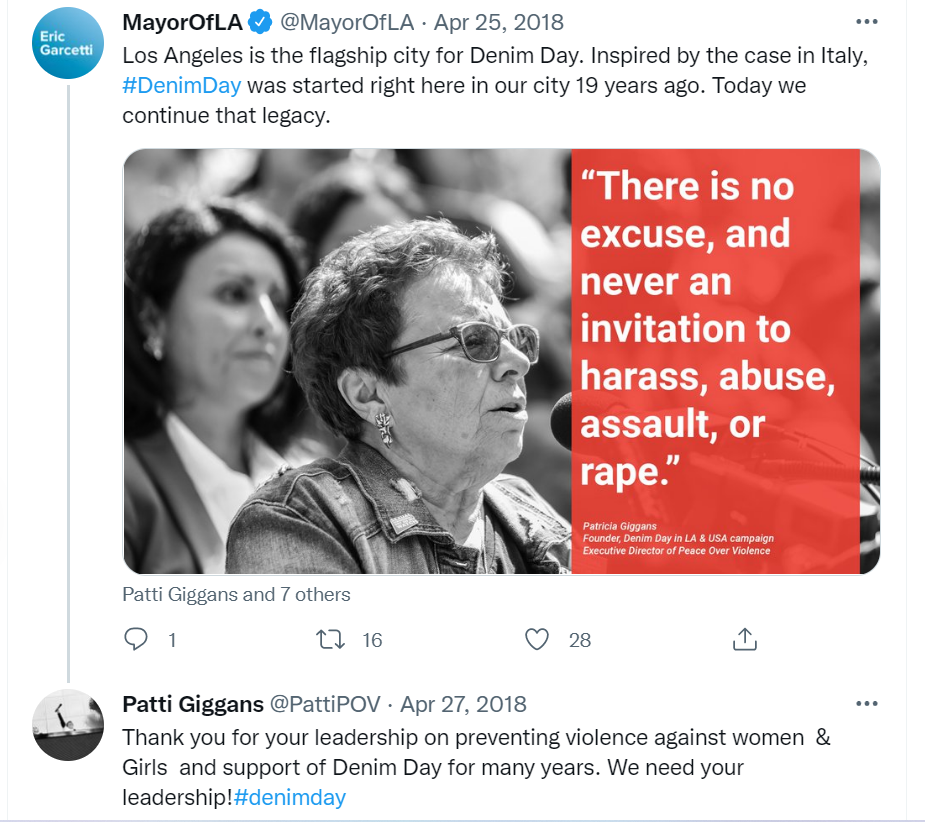 Peace Over Violence? Or Violence Over Peace? How Political and Financial Gain for Sheila Kuehl and Patti Giggins Took Precedence over Sexual Assault Victims

Last week, as a result of a criminal investigation spanning three-years, warrants were served at multiple locations, including the home of Supervisor Sheila Kuehl, LA Metro Headquarters and the home of Peace Over Violence CEO Patti Giggins, a close friend to Kuehl, to seize documents and evidence involved in Pay-To-play, Fraud, Waste and Abuse, among […] 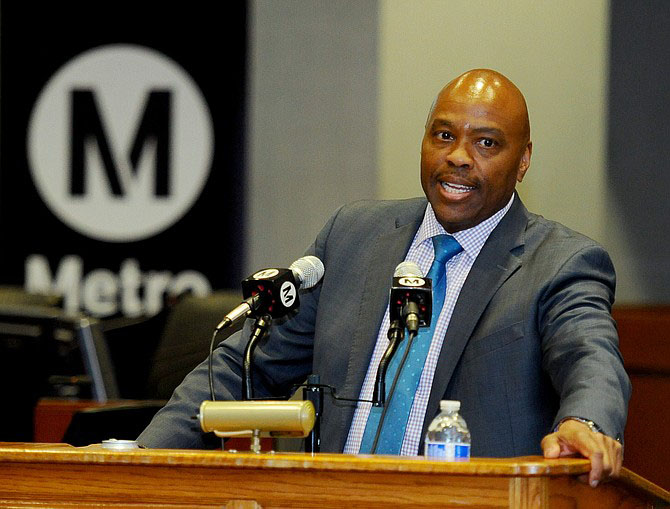 According to sources inside the White House, shortly after the LA County Sheriff’s Department served warrants at LA Metro headquarters Wednesday morning, members of the Secret Service delivered copies of the warrant to President Biden. The reason for the high-profile hand-off? The warrants included former LA Metro CEO and FAA nominee Philip Washington. Washington-based sources tell The […]

Join @heshermedia and I as we discuss the #WTF mom

We are so exited to attend the private premiere sc

Burning the night oil for @calimaglife with @tarao

In the work flow… @calimaglife Is it happy hour

A very powerful conversation on @tntradiolive with

A SEASON OF CHANGE: We're in the Season of Change.

Holiday festivities in full swing this weekend in

So much to talk about in the third hour with @Hesh

It’s beginning to look (and feel!🥶) a lot lik

@HesherMedia and I are LIVE at the top of the hour

#happyholidays from the #southbay 🎄✨🥂 @jen

There has been a problem with your Instagram Feed.